We have a new exciting paper out: Temporal and cultural limits of privacy in smartphone app usage by Vedran Sekara et al. published in Nature Scientific Reports, asking: 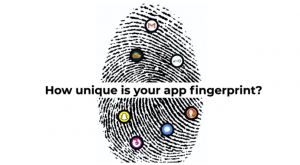 The paper looks into which apps people use and creates app-fingerprints for 3.5 million individuals. Similar to forensic science where you need 12 points to distinguish between fingerprints we ask how many apps do we need to distinguish between two users? We find people’s smartphone app behavior is very unique and 3 apps are enough to identify more than 90% of all individuals. But app-fingerprints change over time and are different between countries. We find that people have more unique app-fingerprints during summer because we use more unique apps, and Americans have the most unique fingerprints (need the fewest apps to identify them) while Finns are the least unique (need more apps to identify their fingerprint). Why is this important? Because the work highlights problems with current policies intended to protect user privacy and emphasizes that policies cannot directly be ported between countries.