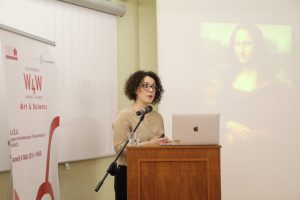 NERDS member Roberta Sinatra has returned from Monte Carlo, where she presented her research in an inspiring keynote talk for the yearly Prix Monte-Carlo Femme de l’Année. The theme of this year’s edition of the accompanying Women For Women (W4W) conference was Arts & Science, to which Roberta’s recent research on the scientific quantification of success in art fit perfectly. The conference was held in a very special place: the headquarters of Monaco’s International Atomic Energy Agency (IAEA).

The talk and its consequent discussions were well-received by the mainly female audience, and by The Prix’ illustrious patrons such as Walgreens Boots Alliance COO Ornella Barbara or the reigning monarch of Monaco, Prince Albert II.